We’re getting so big!

Millie is really getting so big! (and no…not just weight wise…I think she’s finally starting to slim down a bit!) I mean…she’s just acting “bigger” each day. She loves to play with Mason’s cars and push them around while making “vroom” type noises. She also says “Mama, Dada, Ni-Ni (night, night), chips (yep…chips…she’s never even really had them!), and choo choo! She also is starting to point at lots of stuff while jabbering about them. And…when you tell her no, she’ll frown at you, scrunch her eyebrows, get serious, and tell you off! (which of course, we end up cracking up!) We’re still not even close to walking. She won’t pull herself up, but she’ll stand and hold onto stuff if I place her there. As long as she walks before Kindergarten, we’re good! 🙂

I went to some garage sales today and bought Mason some tractors and hotwheels…and when I came home, you would’ve thought it was Christmas! He was so excited and has been playing non-stop. (and they are all in his bed napping with him right now!)

I scrapped a picture from Nationals (you were right, Sarah…I made it a scrapbook page!) 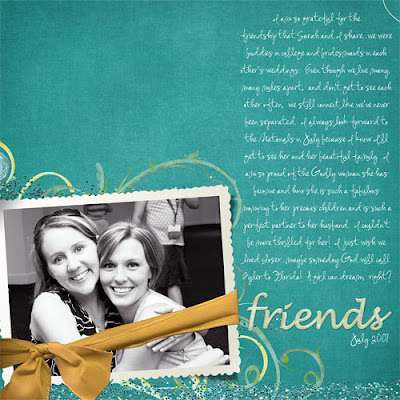 Sarah…I am so thankful to have you as a friend!!!! You truly mean so much to me and I am so glad that God has given you to me as a friend! I love you bunches!